The Founding of Theta Xi

Christopher “Kit” Waite, whose father was destined to become Chief Justice of the United States Supreme Court, was from Toledo, OH. Peter Fox from Harrisburg, PA and Thomas Raymond, a “downeasterner” from Westborough, MA, together with Waite, were the only Founders from out of state. Nathaniel Starbuck was a “local” from the campus town of Troy whose father, a leading citizen of the town, was often called upon to address public meetings to arouse popular support for the Lincoln administration. The remaining Founders were all New Yorkers: George Brainerd from Brooklyn; Samuel Buel, Jr., from Poughkeepsie; Ralph Packard from Niagara Falls and Henry Farnum from Port Jarvis.

In 1864, Rensselaer was attempting to rebuild. The Civil War had threatened the future existence of the institution, just as it had threatened the future existence of our Union. In 1861, the collar factories for which Troy was famous nearly all closed down, and several other large manufacturing plants went idle. In 1862, sparks from a passing locomotive ignited the roof of a covered bridge spanning the Hudson at Troy, and before it could be halted, the fire swept across a 75-acre tract, completely destroying over five hundred structures in the heart of Troy’s business section, including the downtown RPI campus. Two years later, the students and faculty moved to the newly constructed Main Building, the center of Institute Life for the next forty years.

All of the Founders were members of Sigma Delta, a local fraternity established in  1859 to rival Theta Delta Chi, the only secret society then at Rensselaer. Crude in its beginnings, Sigma Delta gradually increased and prospered so that, by the fall of 1863, it had become a secret center of attraction for all freshmen. Debates formed a regular part of Sigma Delta meetings (as in other fraternities at that time) and these were judged by the presiding officer. Spirited debates were held on such topics as: “Genius is more necessary in the pursuits of science than in the pursuit of art”; “The use of tobacco is injurious”, and “The rum barrel is more potent than the gun barrel.”  Dissension within Sigma Delta became apparent on October 30, 1863, when George Brainerd tendered his resignation to the society. The resignation was unanimously declined, but it contributed to a rift that would not heal. On that same day, due to an apparent desire of some of the members to “bust up” Sigma Delta and try to become part of another organization, Samuel Buel suggested that Sigma Delta try to obtain a charter from some “large and flourishing society such as Sigma Phi,” which had been founded in 1827 at Union College and had six chapters at that time. He had previously had an interview with a minister who belonged to Sigma Phi, who assured him that he favored such a move. He promised to do all in his power to help them obtain a charter. Sigma Phi sent representatives to Troy who were entertained and had their hotel bills paid.

A petition was prepared and submitted to Sigma Phi, but at its convention at Union College on March 4, 1864, a motion was adopted to the effect that no more charters be granted. Since no action was taken on Sigma Delta’s petition, this was accepted as a refusal.

Dissension in Sigma Delta continued to grow such that two factions sprang up within the society. The eight members who ultimately founded Theta Xi considered such divisiveness incompatible with their ideals of unity and fellowship. They determined to build anew with the intention of forming a society national in scope — a tall order for the Civil War era!

The ill feeling became more acute after the failure to obtain a charter from Sigma Phi and at a regular meeting held on March 11, 1864, attention was called to “the sad condition of the society.” A suggestion was made that “each one present express his views concerning the management of the affairs and offer some plan of removing this feeling which has existed, and does now exist, among us.” This suggestion was accepted and each member in turn was called upon for his opinion. One suggested plan, which met with instant favor and was finally agreed upon, specified that bottles, suitably covered and labeled, be provided and placed in the adjoining club room.

On March 12, 1864, two large cups of white and black beans were provided for the purpose of voting. A bottle was placed upon the table and each member went into the clubroom to cast his ballot on the member whose name appeared on the bottle (a tradition used by some chapters to this day). After everyone had voted the bottle was sealed, and the next vote taken. When the process was completed the members assembled in the club room to count the votes. Before any bottle was opened, each man deposited on the table the keys and all other property in his possession which belonged to the society. The bottles were emptied alphabetically and, as one received a majority of black beans, he took up his hat and left. The first person who received a majority of black beans remarked, “I guess I am not wanted here.” Four of our eight founders had opened their bottles before the five who received a majority of black beans left them in possession of the room. A new lock was immediately put on the door.

At a meeting held on April 1, 1864, a committee consisting of Waite, Buel, Brainerd and Packard was appointed to prepare a constitution. At this meeting the secretary was instructed to recall their petition to Sigma Phi and to inform them of their intention to form a new society. On April 6, Buel presented two monograms, Theta Xi and Theta Psi, as possible names for the new society. Theta Xi was chosen because of the reported existence of a local society called Theta Psi at Yale.

On April 29, 1864, that most sacred night in the history of our brotherhood, eight former members of Sigma Delta met in their secret rooms for the purpose of founding Theta Xi. Ralph G. Packard was chosen chairman because he had been president of Sigma Delta at the time of its dissolution. Brother Farnum was requested to act as secretary. A committee made up of Brothers Buel and Brainerd was designated to develop an initiation service, while another committee comprised of Brothers Raymond, Starbuck and Brainerd was made responsible for developing a grip, various symbols, the names of the officers, as well as for completing all vacancies in the constitution. The Constitution, By-Laws, and Rules of Order which had been drawn up by the committee were read and adopted without a dissenting vote. The oath of initiation was taken by all the Founders as a group, and then they signed the Constitution alphabetically and by classes. The new society decided that the chapter be called the “Alpha Chapter of Theta Xi,” and that each succeeding chapter should be named by the following letter of the Greek alphabet. On the same night Edward H. Morrison was unanimously selected the first new member of the Fraternity, and was initiated eight days later on May 7, 1864.

Various concerns about Fraternity operation were addressed during the months that followed. At the beginning of the next school year, fall of 1864, six of the Brothers answered to their names at roll call. Recruitment efforts that Fall increased their number to eleven.

William H. Wiley, initiated as Alpha 11, had a close friend at the Sheffield Scientific School at Yale University in New Haven, CT. He approached his friend with the idea of forming a chapter at Yale and found him to be in favor of the idea. On October 29, 1864 Frank Martin Guthrie and Thomas Ira Atwood, members of the Class of ’68 at Yale, came to Troy to be initiated as honorary members and to be instructed in the secrets of the Fraternity. Upon returning to Yale, they organized a chapter.

In December, two members of Alpha Chapter were sent to New Haven to help Guthrie and Atwood initiate three more men, and a sixth was added in February, 1865. Although these men held meetings, they were not regarded by Alpha Chapter as a chapter of Theta Xi until they received their Constitution. This document was not received until April 26, 1865, when Beta Chapter was officially installed and Theta Xi started on the road to becoming a national organization.

It was not until 1905 that Theta Xi began its westward expansion with the chartering of Theta Chapter at Purdue in February of that year, and Iota at Washington University in St. Louis a month later. 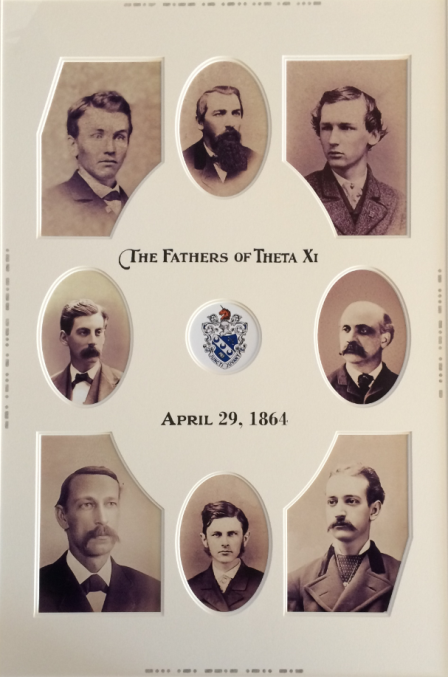